With the season winding down we headed east for our annual trailer tournament around the Chowan. One tourney was the scheduled one, with a bonus tourney added to make up for the Corona cancelling us in April.

Saturday brought bluebird skies and temps in the high 70’s – perfect late summer weather.  Troy came out swinging on day 1, bringing 13.50 lbs to the scale for the win – his 2nd Chowan win in the last 2 years. 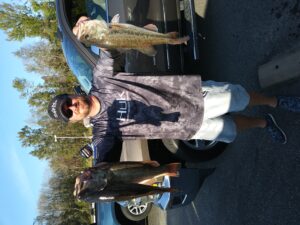 Guest Ethan put together a limit late in the day, adding this nice 5.85 kicker to his sack with about an hour to go.  That allowed him to bring 12.79 lbs to the scale for 2nd place. 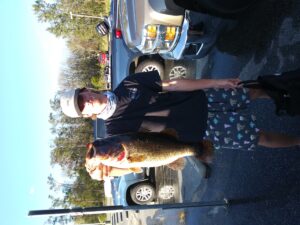 Big fish for the day goes to Doug – a 6.28 lb giant – his only fish of the weekend.  Doug left nothing to chance though, not only wearing his lucky hat, but also sporting vintage Hibernia gear from the 80’s.  Rock that shirt – rock that fish Doug!

Sunday’s weather took a turn for the worse.  Heavy fog followed by rain, rain and more rain.  Despite not having any rain gear, Owen slogged through to secure a limit weighing 11.99 lbs for the win.  No pics were taken due to excessive moisture in the air, so here’s Owen with one of the MANY Drum he caught over the weekend. 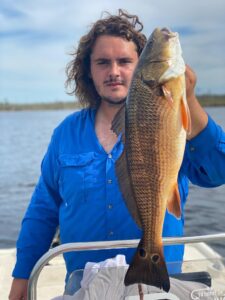 Full results below.  On to Kerr – Hibernia for the final tourney of the year!