With summer about to hit us head on, and Corona (hopefully) behind us, we headed down to Shearon Harris for our 6th tournament of the year.  One of the top 3 lakes in the area for producing BIG bass we were all looking forward to filling our livewells with trophy sized fish.  We have recently heard reports of “shock testing” in the lake which supposedly showed at least two bass weighing 18 lbs lived there.

While most of the anglers caught more than a dozen fish, there was the “Harris” problem to contend with….

you can’t keep any bass between 16 and 20 inches.  It would seem the fish know that and quickly grow to 16 inches and then miraculously stop growing at 19.75 inches.  Those are some smart fish!

Mike took  home his second victory of his rookie season, despite only bringing 4 keepers to the weigh-in.  His kicker was 1 of only 2 fish caught over the slot limit, giving him 9.02 lbs for the day. 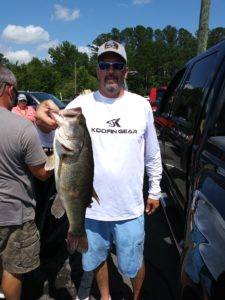 Next up is a return to Falls on Sunday, July 19th.  Hope to see many more of you then.