With the whole coronavirus thing largely under control we were able to return to the lake as a club and have weigh in on the solid ground of the parking lot.  Well, mostly.  We certainly weren’t the only ones as at least 70 boats launched from Ledge Rock on May 30.

There were plenty of fish to be caught, but you had to get them early.  One person got the early and often, and found the right ones.  Adam put together a very impressive sack of 27.83 lbs, including a 7.69 lb kicker.  WOW!  This is the largest sack the club has seen in a LONG time, though not the largest ever.  While official records aren’t available, club founder Robert does remember some 30 lb sacks being caught on Lake Jordan some time in the previous century.

In 2nd place was our child prodigy Nolan, bringing a very impressive 18.33 lb sack to the scales.  Despite the best efforts of his father to back boat him all day, he STILL managed to snag some hawgs to bring to the scales.  Here his father actually helped him out to show off all the full catch. 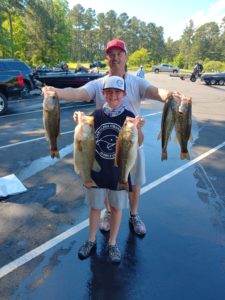 Next up is Shearon Harris on June 20.  Hope to see you all there!