Pretty much got everyone freaked out.  Some lakes were closed; most had restrictions on the number of people who could congregate.  Regardless, for the 2nd time in 3 tournaments this year, we had to change our venue due to circumstances beyond our control.  After a spirited text debate to decide between fishing or postponing, the club majority decided to set a great example for all by social distancing and fishing.

Lake Holt seemed to be about the only option, so we descended upon the small reservoir in Butner for tournament number 3.  The Lake Holt Grill was a gracious host for us, even coming in a bit early that day to open the gates and get us on the water.  Unfortunately for many that was the highlight of the day.  Apparently the fish didn’t get the memo to wake up early, or at all, making it a tough day for the group.

Full results at the bottom of the post.  Shout out to Alicia from Lake Holt Grill for sharing photos!

The only angler who managed to stuff his livewell was Mike, bringing his 5 fish limit to the scale.  Although it only weighed 6.00 lbs, it was enough for the victory. 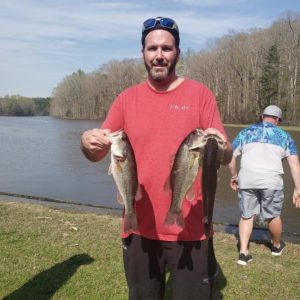 Greg once again managed a 2nd place finish without even catching a limit (see Harris tournament week 2).  One of the fish in his 4.93 lb sack ended up being the big fish of the day at 2.44 lbs. 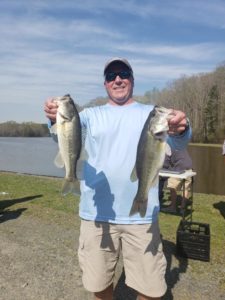 Another bright spot for the club was that we AGAIN had 15 fishermen, which allowed us to pay a 3rd spot.  Pictured here is Nolan holding his Dad’s 2 fish weighing 2.99 lbs, which earned Damon 3rd place for the day.

Where are we going next?  Good question.  Our schedule says Chowan, but if this CoronaVirus thing sticks around to long, travelling would not be logical captain.