For the 2nd year in a row a crew got together on New Year’s Day to fish a team tournament on Gaston, just to kick the year off right.  Three days later, at the annual meeting on January 4th, those same anglers said Gaston was “ON” and were ready to kick off the year – and the sooner the better.  They convinced the rest of the club it was time to start the year – still in January.

So January 25th we headed out to Lake Gaston to commence the 2020 season.  We had a solid turnout of 15 anglers, with only 2 members not able to make it.  That’s right – we’ve now grown to 17 members (2 lifetime and one junior), and we’re looking to add a Few (more) Good Men (or women) to the club.  Come on out and join us!

We waited for the sun to come up and temperatures to climb (a little) before blasting off at 8.  When we got back for weigh in the man with the big bag of the day was David.  He caught at least 25 and culled a 2.93 late in the day.  His sack of quintuplet 3 lb spots weighing 15.29 lbs was good enough for the win on this mild winter day.

George brought to the scales the most improbable of fish – not just for him, but also for Lake Gaston.  Sometimes it’s better to be lucky than good as evidenced by his late in the day surprise – a 10.31 lb behemoth of a largemouth.  Though only 2 spots came to the scales in the same bag, the 3 fish totaling 14.00 lbs was good enough for 2nd. 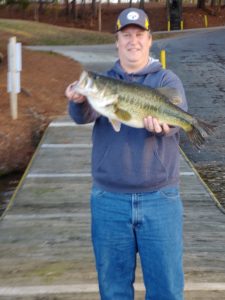 Cruising into 3rd place with another limit of spots was Damon.  His 10.15 lb bag bested the rest of the field for a 3rd place finish. 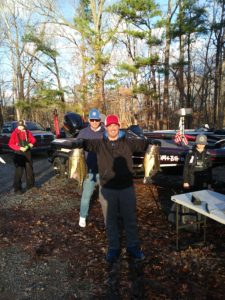 An interesting side note – this was the largest bass weighed in a Hibernia Bassmasters tournament in the 50 year history of the club.  The previous record was 9.4 lbs caught by club founder Robert in 1997.  He still remembers the exact tree he caught it off in the Chowan.

Another side note – not only is George’s big bass 10.31 lbs, but that EXACT same weight is shared also by Damon and Owen as their biggest ever bass.  Will one of them be able to break the tie??

Next we go to Jordan Lake – home to many monsters, some of which we would love to see at the scales.  February 9th will be the day – let’s hope for clear skies and tight lines!