With the 2019 season in the books, and most of us looking forward to next year, the club assembled for our year end awards banquet.  Once again Middleburg Steakhouse in Middleburg hosted our event.  Their food (prime rib, rib-eye, shrimp, etc) is fantastic.  We rent out the wine cellar and they provide excellent food and service.  We will certainly return again!

As we all arrived we gladly greeted each other, eager to catch up on the last month.  Some of us seek time with other fishermen, discussing next year’s schedule and how to have an even better 2020. 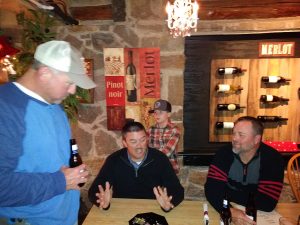 Others take advantage of the opportunity to catch up with the ladies.  He is one smoooooth operator. 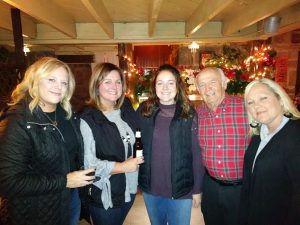 A total of 11 members and 2 lifetime members attended the event.  Most bring a family member or three to enjoy the food and atmosphere. 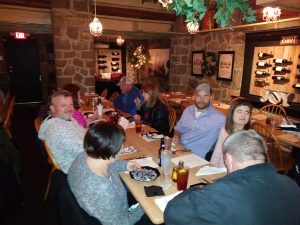 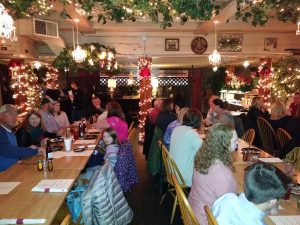 … and there’s that dude again…. 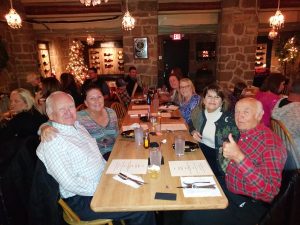 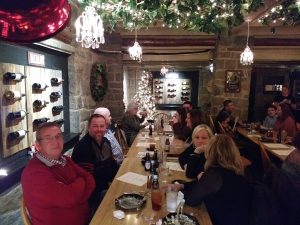 Then on to the awards!

Big Fish for the year goes to Robert for the lucky 7.11 he caught on Jordan.

The 3rd place angler for the year was Damon, who brought 100.64 lbs to the scales during the season.  Damon was slow and steady all year, placing top 5 in most tournaments. 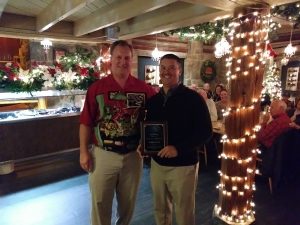 2nd place for the year belongs to Robert with 104.09 lbs coming from his best 10 tournaments.  Robert was the early leader with strong showings the first few months.  Alas as Summer and Fall came he waned just a bit. 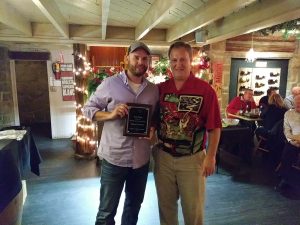 And finally…. at long last…. after finishing 2nd place AT LEAST 8 times in previous club championships, Greg is finally a winner.  Except for a hiccup at Badin he dominated the season winning 5 times.  His total weight for the year was an impressive 145.46 lbs, easily bringing him the title.  No longer a bridesmaid, Greg is our club champion for 2019. 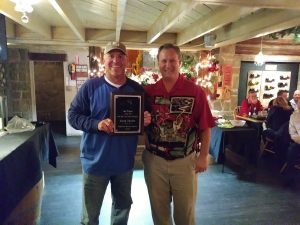 The final award of the evening goes the the angler who dedicated the most to making the season great for everyone.  This year’s Most Dedicated Angler is Damon.  He ran the scales at about every tournament (except the one he missed gator hunting), and always made sure to keep things fair.  No bearings or other breakdowns could keep him from bringing his son along with him almost every time.  He truly was dedicated to the club’s success all year long. 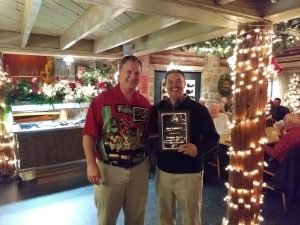 And with that the 2019 campaign is in the books.  Next year Hibernia Bassmasters will celebrate our 50th anniversary.  Founded in 1970 by lifetime member Robert Duncan, the club is still going strong half a century after it was founded.

Until then get to retying and boat maintenance and all the other off season essentials.  May Santa fill your stocking with baits the fish like more than you! 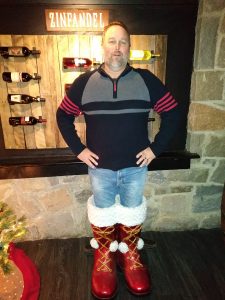