As is tradition in the Hibernia Bassmasters, the last tournament of the year always fishes Kerr Lake from the HIBERNIA Ramp.  So 10 members and 3 guests came to fish for one last club tournament in 2019.

Weather all summer has been DRY and HOT.  Crystal clear blue skies greeted the anglers, with air temperatures in the 80’s and water temps around 75.  While many figured out the pattern, many others struggled to fill their limit.  The anglers were as confused as many of the fish it would seem,

Damon figured out enough to take home the victory.  His 5 fish limit weighing 10.83 bested the second place angler by a mere .12 pounds. 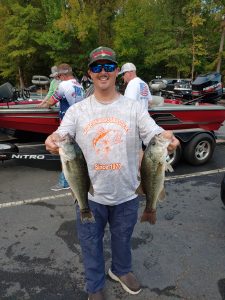 Riding with Damon, as always, was his son Nolan.  Already an accomplished angler, Nolan again took home some cash.  This time from the big fish for the day, weighing 3.35 lbs.  A truly unique photo here, with Nolan holding his fish, with another fish Nolan caught and weighed in its mouth. 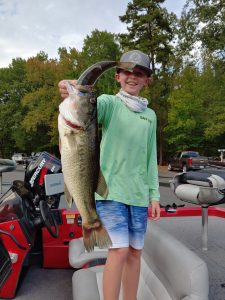 And now onto the big news of the day – Greg finished in 2nd!  Well, that’s not big news really – he does that year after year.  But this year was different……

While Greg did finish second in this tournament, with a limit weighing 10.71 lbs, he was able to accomplish something on a grander scale.  See Greg has always been the bridesmaid – never the bride.  Despite fishing clubs for dozens of years, he has never won a season crown, settling for 2nd more than half a dozen times.  This year was different – it was finally Greg’s year.  His 1025 points were the best by 67.  His 145+ pounds weighed left 2nd place in the dust, more than 40 lbs behind.  Final standings here.

Here is he with his 2nd place sack for the day, but already dreaming of hoisting the season champ’s plaque at the annual awards banquet. 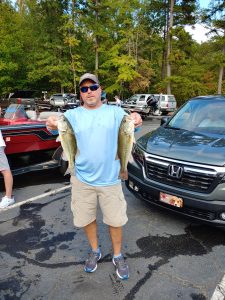 What’s next for Hibernia?  First we have our membership drive tournament going out of Ledge Rock on Falls Lake November 2.  See the article for more information.  We finish the year at Middleburg steakhouse November 16 for our awards banquet.  Here’s to 2019 and looking forward to 2020.