Lake Gaston in the summer – what would you expect besides clear blue skies and a lake filled with pleasure boats.  We got that and more Sunday. And it was hot.  Boats and waves galore.  No clouds (my boat had shade for about 30 seconds around 2p and it was glorious). No breeze. It was HOT!  Highs in the mid 90s made fishing a secondary concern for some.  Fellow anglers always need to be aware to stay hydrated while fishing in such conditions, as one club member was forced to leave early when he over heated too much.  Fortunately he was smart enough to bail out before it got too bad.

As for results rookie Robert wins his 2nd consecutive tournament and 3rd on the year.  His bag of 10.73 was just enough to edge second place by .2 lbs.  His kicker fish of 5.09 likely had a say in that. 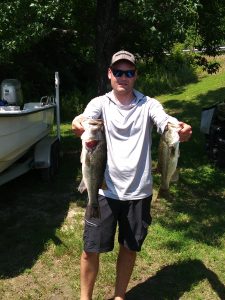 In a surprising twist of fate, finishing a close 2nd was George with 10.53 lbs.  Rare are the cashes for the club president, but it certainly never stops him from trying.  A 3.75 lber caught in a foot of water around 2p helped him leapfrog Owen for 2nd place. 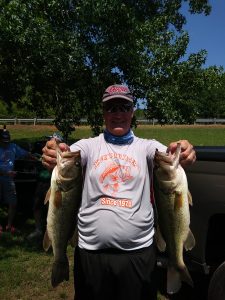 After developing the photos from the day we noticed this anomaly in one of the photos.  We believe it to be the Lake Gaston Phantom fisherman.  A rare sight indeed. 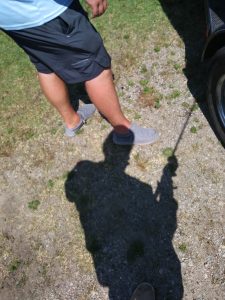 Gaston was a successful tournament as far as the club goes.  We had 14 anglers even though 3 members were unable to attend.  The club is in great shape and growing with an awesome group of guys.  We next hit Lake Michie on July 20.