Lake Gaston in March – ah the pleasure of dodging the pleasure boaters.  But would the bass then be dodging us?  Another club held a tournament on Gaston the day before ours and the results were foreboding.  15 anglers – ONE fish.  Would the promise of a warmer day stir the bass into a more active state?  Though we were all hopeful, it simply was not to be.

Focusing on the positive, I’m pleased to say we had a recent record of 16 anglers show for the event, fishing from 9 boats.  It is wonderful to see the club again flourishing, with aspirations for even more members to join.  It will be even better when we meet favorable conditions on tournament days, for this day yielded less than favorable conditions.  Yes – 16 anglers; but only 9 fish would be caught. 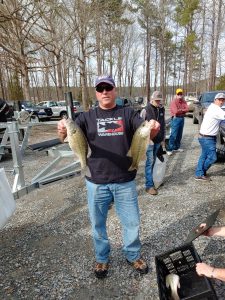 Last year’s season runner-up Greg showed why he might earn the nickname Mr. Consistency (should he choose to shed his “Old Rusty” moniker).  Though his normal routine is to bring a limit to the scales, today he was only able to bring three bass to the scales, though what was more than enough to take first place.  David caught the big fish in the first hour of the tournament, but didn’t get another bite the rest of the day.  Still that was good enough for second place.  Rookie Robert B. took third, also with a single bass.

Now it’s on to Lake Jordan in two weeks.  Best of luck to all. 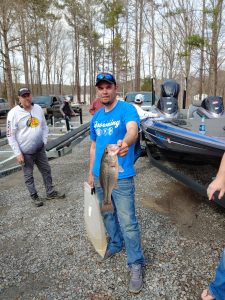