2018 was a great season for the Hibernia Bassmasters as we expended our member roster and explored some new and different lakes.  We are hoping to do more of the same in 2019 and are hosting a membership drive tournament on Sunday, October 21st at Falls Lake – Ledge Rock ramp.  Read more about it here.  Come on out to meet us and see if you’d be a great fit for the oldest bass club in NC.

Anglers of the Year:

Last year’s champion David had another strong campaign coming in 3rd for the season, despite missing 2 tournaments.  He won twice during the season (Falls and Kerr) and had his big sack of 18 lbs edged by William in the second to last tourney.  His 6.80 big fish for the year was one of 3 he weighed this year that eclipsed the 6 lb mark.  Like Duke basketball, he’s always in the mix, and often comes out on top. 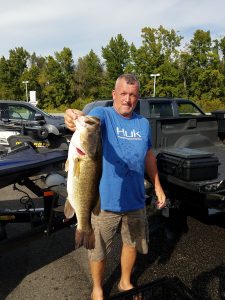 Last year’s runner-up had another strong season, posting a club best 5 tournament wins on the season, and bringing the top weight of 121.52 lbs to the scales over the course of 12 tournaments.  Unfortunately, rather than winning the club championship, he was more like Phil Mickelson in the US Open (6 runner-ups); like Coach K in the 80s (multiple Final Fours, no titles); or like world strongman Hafþór Júlíus Björnsson , finishing in top 3 six times before winning the crown in 2018.  Always a bridesmaid, never a bride, this is one in a list of MANY 2nd place club finishes over the years in varying clubs, and without taking the crown for the year.  Congratulations to Greg on a great year. 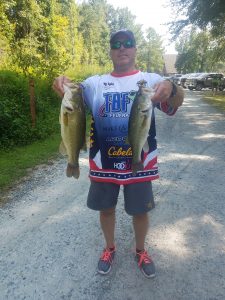 And that brings us to this year’s champion (and obvious rookie of the year if we had such an award).  Four wins during the season to go with four runner-ups in 12 tournaments – seemed he was taking our money every week.  He must have a KVD tattoo hidden somewhere.  William brought in great sacks and limits every tournament, except when he was down east and ran out of baits – only then did he settle for less than the best.  An amazing rookie campaign that should lead to many great seasons ahead.  Congratulations William! 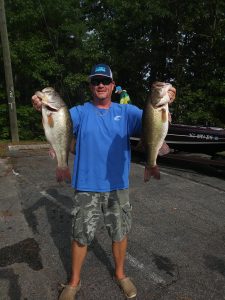