Saturday was the final tournament of the 2018 season, and as tradition would have it the club put in at Kerr Lake, using the ramp at Hibernia.  Most of the members were able to make it along with some of the “old-timers.”  Wayne and Robert made an appearance at the weigh in – all were happy to see the two most senior members spend time with us at the weigh in.  We all owe Robert for being the one to start this club up – all the way back in 1970.

Though a gorgeous day, the rain waters from the hurricane Michael were bringing the mud line down lake, causing the fishing to deteriorate if you found yourself in it.  When all was said and done 4 limits were brought to the scales, proving the fishing was tough for some, yet easier for others.  Last year’s club champion David finished his 2018 campaign with a “W”, bringing a limit weighing 10.13 lbs.  That barely edged George’s 9.95 lb limit – his first of the year.

Congrats to all on another fine year with Hibernia Bassmasters. 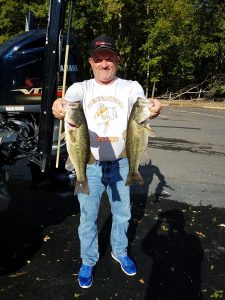 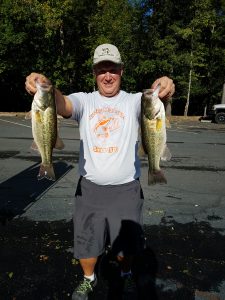